An orrery is a small mechanical model of the solar system showing how the planets revolve around the sun. The first modern orrery was made in 1704 for the 4th Earl of Orrery, hence the name.

A percussion machine by Thomas Meixner, rotated and played by hand. 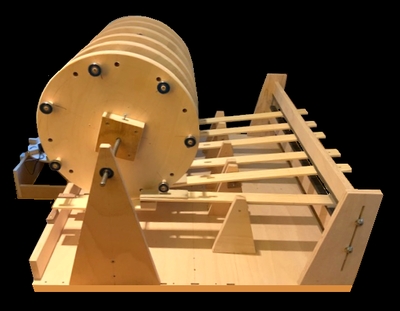 The project was conceived by composer Annesley Black. A hand-operated percussion machine drives a simple orrery. The wheels and pointers of this orrery serve as a conductor for a small ensemble. The percussionist / instrument maker Thomas Meixner first built the percussion machine (above). I was invited to design and build an orrery mechanism to be attached to this machine. 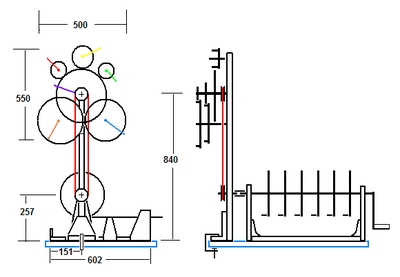 The orrery is raised above the percussion machine so that it is well visible to both ensemble and audience.

There are two kinds of wheels in the orrery: gearwheels with teeth and pinions with pins. Cutting the thin plywood for the rims of the gearwheelswith a knife and trammel:

The 3mm plywood rims for the pinions were cut and drilled with my CNC machine.
( I use similar constructional techniques when making the wheels for clocks - see here)

The orrery is an approximate representation of the periods of Mercury, Venus, Mars, Jupiter, Neptune and Uranus. Accompanying the percussion machine, the pointers of the orrery guide the ensemble through rhythms that are too complex for conventional musical notation.

The project was supported by

The Federal Commissioner
for Culture and the Media