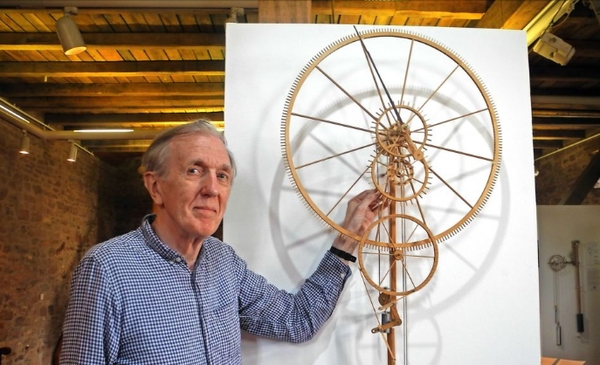 Exhibition at the Saarland Clock Museum

The Saarland Clock Museum is housed in what, for 250 years, was a clockmaker's workshop and a farmhouse. This combination of farming in good weather and clockmaking in the cold winters was common in the Black Forest and the Jura but rare in the Saarland. The last of the clock-making dynasty died in 1938 and the house passed to the town of Püttlingen after the death of his widow.

The collection comprises 650 exhibits including clocks, watches, sundials and tower clocks as well as clock-making machinery. Their most prized exhibits are perhaps a clock that belonged to Maria Antoinette and a clock made at the house itself.

Above: On the left is the Singing Machine, on the right: my work table and between them eight clocks, each mounted on its own panel, and four other panels with texts and illustrations. On the wall in the middle is a screen with a video of the Thinking Machine

to a long clock