(1936-2008) to make the illustrations for his book The Manna Machine. George gave me a free hand in designing the physical appearance of the machine, drawing the illustrations and building a publicity model. We were soon joined by Rodney Dale (1933-2020) who as co-author edited the material and correlated the translations from the Ancient of Days texts of the Zohar. These texts were later presented in full in The Kabbalah Decoded.

What exactly was manna? In their search for an answer, George Sassoon and Rodney Dale began to research into Jewish texts, particularly the Zohar a collection of thirteenth-century writings from oral traditions which some believe date back to the time of the Exodus.

From these texts, they have drawn startling conclusions: that manna was a form of alga cultured in a machine, and that the mysterious texts of Zohar are an instruction-manual for that machine.

This exciting and provocative theory has at last made some sense of the Zohar texts, explains many biblical mysteries and Jewish customs, and throws new light on the possibility of ancient extra-terrestrial visitations. The full translation of the the Zohar texts is presented in The Kabbalah Decoded. The biological and engineering interpretation is explored in The Manna Machine. 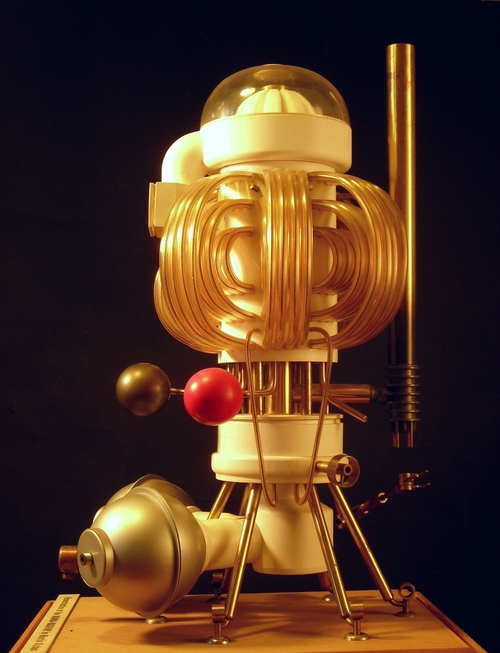 A Manna Machine model. The original is on the book covers below left.
In the meantime the Manna Machine has been featured in books by other authors:

I came across an interesting desert dew-collector or Dew Bank designed by Kitae Pak in 2010 and presented by Yanko Design.
By chance it looks remarkably similar to the Brain of the Ancient One (the dew still at the top of the Manna Machine.).
Kitae Pak's version was inspired by a Namibian desert beetle that drinks the water which condenses on its wings.
to index