Japanese Ladies, Do It Yourself, more 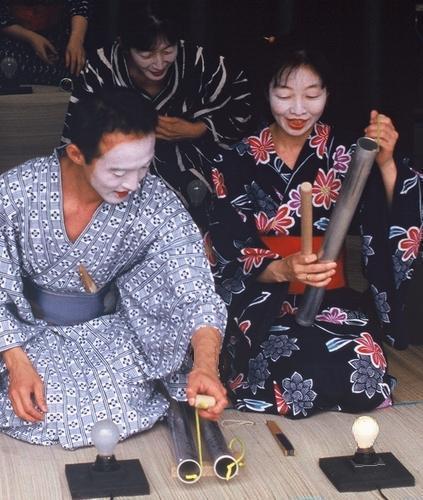 Many of my music machines are played by electro-magnetic actuators driven by signals from a computer. In this performances, the actuators are human beings and the computer signals are flashes from electric light bulbs which provide the cues to strike the tubular bells.

No musical skill is required - all you need to do is to concentrate on the light. It works surprisingly well - after just one rehearsal ... 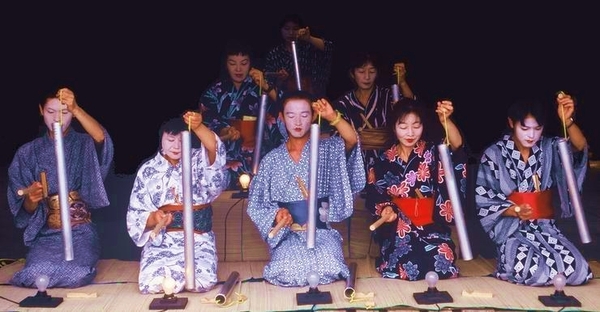 dress rehearsal for the first performance.

The Ladies played 3 traditional Japanese melodies - selected and arranged for 8 players by Makiko Nishikaze. The flash from the light bulb lasted about half a second and the players were instructed to strike the bell at the moment when the light went out; this made for quite accurate timing. To avoid confusion, the pieces had to be arranged to avoid rapid repetitions on one note. As you can see: some players had an extra bell to cover the scales in all three pieces.

Those are fans they have tucked into their sashes; after each number they had a short break, fanning themselves - it was very hot weather - and indulging in light conversation.

FAQ ... yes, on this occasion some of the Japanese Ladies were Japanese Gentlemen.
Do it Yourself (2000)
a 9-voice canon for 8 players by Tom Johnson. 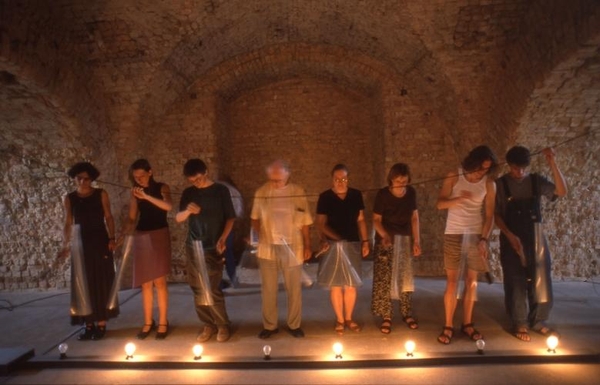 This uses the same technique as the Japanese Ladies (above) but was played by the general public - visitors to the installation in the singuhr galerie, Berlin. Tom Johnson (fourth from left) provided additional versions of the canon for a reduced number of players.