Bicycle bearing made of wood

For some time I had been having trouble with the bearing for the crank shaft of my bicycle which has a late 1960s Peugeot frame. I decided to replace it with a bearing made of wood and bought a piece of lignum vitae from a specialist wood supplier in Hamburg. Lignum vitae is a dense tropical hardwood, naturally oily, and has been used for bearings in hydroelectric turbines and for the stern tubes of ships, including that of USS Nautilus, the first operational nuclear-powered submarine. 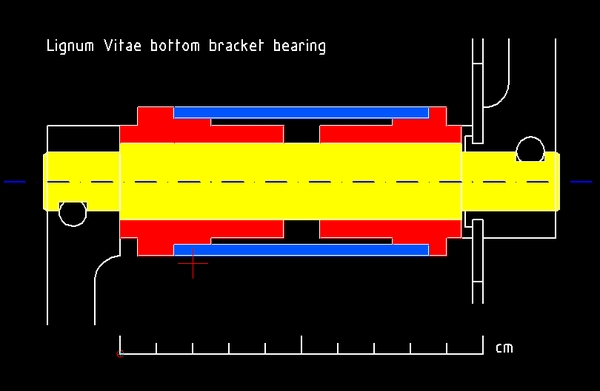 The bottom bracket shell has a 35 x 1 mm right-hand thread on both sides. It is obsolete and spare parts for the bearing are not readily available.

The wooden bearings were turned from two octagonal blocks, each 4 cm wide x 5 cm long. The "threaded" sections were turned plain and very slightly oversize and then each half was carefully screwed into the bottom bracket shell using a wooden clamp on its protruding octagonal flange to drive it in.

The outside ends of the bearing press directly against the polished side of the left crank and against a polished washer next to the sprocket wheel on the right.

The axle was turned from mild steel and polished. It is a smooth press fit in the bearing.

Further information:
- A table of bottom bracket details and dimensions.

- Another way of doing it using cheaper, less exotic wood ...
Oil-soaked wood bearings. How to make them and how they perform.

So far so good; there is no play in the bearing but the ends of the mild steel axle are showing rust - I cleaned them off and gave them a coat of anti-rust paint.

Despite daily use, no play in the bearing. On the contrary, it tightened in hot weather. I drilled two lubrication holes: one left, one right. A shot of light machine oil solved the problem.