Knock on Wood is a collaboration between composer Tom Johnson and artist Martin Riches. Control system and software are by Dipl.Ing. Manfred Fox. It was shown for the first time at Circuit, centre d'art contemporain, Lausanne, for 6 weeks from 9th Feb. 2019. 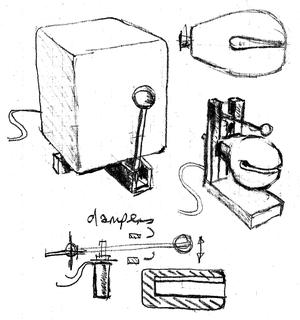 The installation uses ready-made wooden percussion instruments playing complex rhythms automatically that would be difficult - but not impossible - to play accurately by hand. Each group of instruments is made from a different kind of wood, each with its own defining timbre.
The installation consists of five different groups of instruments, each playing in a cycle ranging from approximately 20 minutes to one hour. Each group plays its own melody independently of the others, and followed by a silence:-

This results in drifting layers of sound with one, two or more groups playing at the same time punctuated by occasional periods of silence.

The five groups of instruments 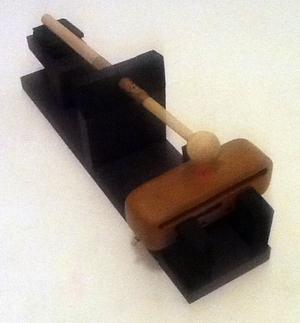 Solution 571 This is one of the 572 sets of nine-beat rhythms in measures of 18 beats, calculated by the mathematician Franck Jedrzejewski. It is played on a woodblock with a high-pitched incisive sound. 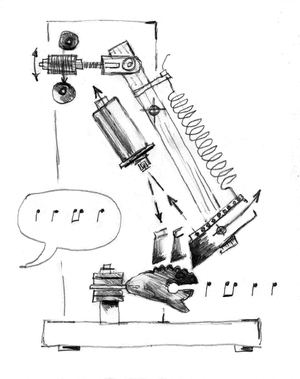 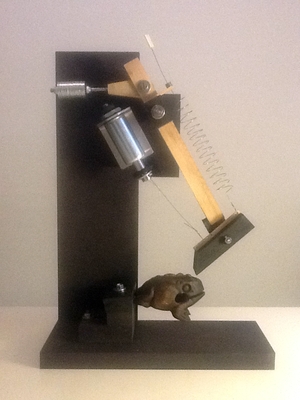 Call and Response A trapezoid woodblock plays the Calls. The Responses are produced by a frog-like instrument played by a scraper mechanism.

Three Tempos In the recording the three instruments were played standing side by side but in an installation they can be spaced out 20 meters apart. 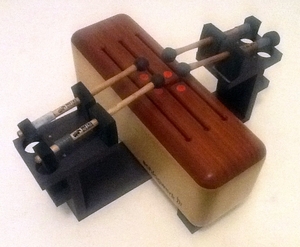 Quartet Played very fast on a log drum: four different pitches from one piece of wood. Quite difficult for a live player; the four notes are not lined up like they are on a marimba. 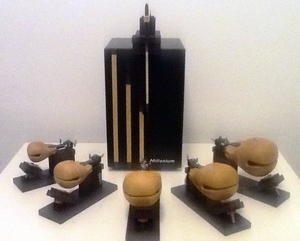 Deep Rhythms It combines a Latin salsa instrument, the cajón, and five Chinese temple blocks. The cajón keeps the beat and the temple blocks produce the deep rhythms according to rules laid down in The Geometry of Musical Rhythm by mathematician Godfried Toussaint. 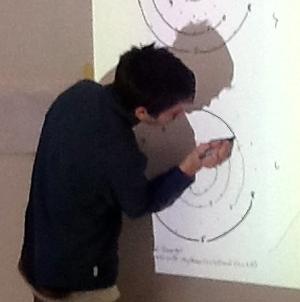 The murals, the ovals in the exhibition layouts below, are enlargements of the diagrams drawn by Tom Johnson to explain his compositions. They were projected onto the walls with a beamer and skillfully traced with an acrylic felt-tip pen.

Knock on Wood at Circuit, Lausanne, 2019 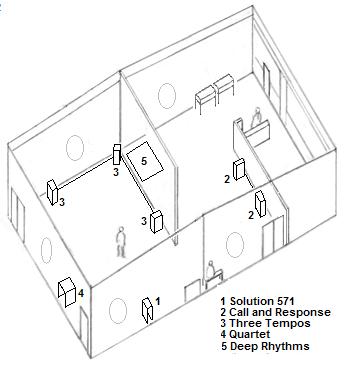 Deep Rhythms is on a low platform - 5. The other instruments are mounted on open-backed pedestals made of brown MDF that contain the control systems.

The pedestals were recycled. Here's how. 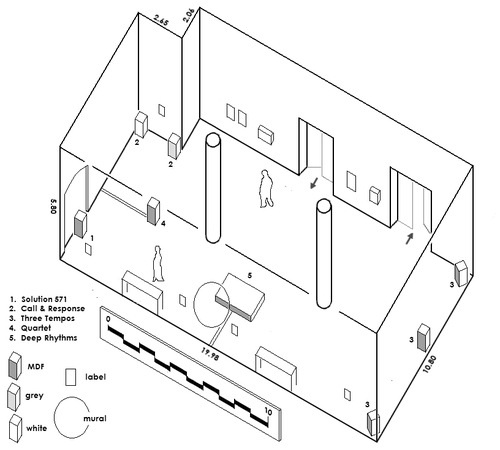 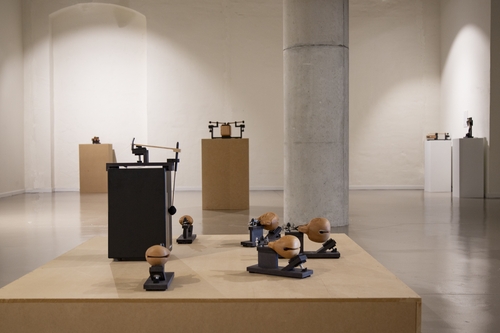 The instruments were bought by Tom Johnson in Paris and sent to me in Berlin.

Each group of instruments looked different but I wanted the installation as a whole to look unified. This was done by making all the holders for the instruments and beaters from the same material and with standardised dimensions. I ordered eight strips of 20 mm black MDF, cut to size for me by my wood shop: each strip 10cm wide and 2 metres long.

I cut the 2 meter MDF strips to size with a fine-bladed Japanese saw, using a specially-made guide locked onto the strip to keep the saw blade dead straight. (This could easily have been done with a circular saw but I didn't fancy the black MDF sawdust.)

The wood blocks rest on soft rubber strips and are held in place by soft rubber straps. The flexible hinges for the drumsticks were made of 10cm wide strips of 20 mm sorbo rubber; the same dimensions and colour as the black MDF - but bendy! Holes were cut in the sorbo rubber with a DIY 10mm. tubular drill to take the shafts of the drumsticks. The drum sticks are powered by a bolt fired upwards from a solenoid. These rugged solenoids are spare parts, ordered from a pin-ball machine supplier. The connections to the solenoids are protected by black vacuum-formed plastic covers.

Each group of instruments has its own independent Raspberry Pi controller. The data for each group was extracted from the MIDI files generated by Tom's Finale score and stored on an SD card. Each controller, with its SD card-holder, its power supplies, twist-lock output sockets, on/off switch and mains cable connection is housed in an aluminium case, and placed inside one of the MDF pedestals. The pedestals have open backs and stand 10 cm from the wall. Each controller is connected to the instruments in its group by heavy-gauge rubber cables - a type that naturally lies flat on the floor. The cables run along the walls of the gallery. However, the six Deep Rhythms instruments all sit on a single low platform; their controller and their connecting cables are underneath the platform. 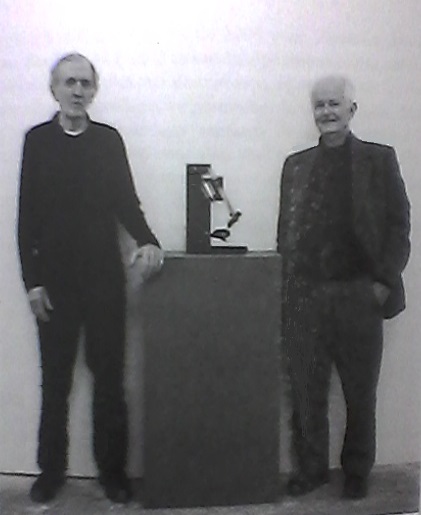 Other projects by Tom Johnson and Martin Riches