"Over the course of the past fifty years, Martin Riches has created over sixty kinetic sculptures and sound installations. Born in England and based in Berlin since 1969, Riches' artistic output has made him a living legend in the world of Sound Art."
knocking and turning 2020 exhibition text

Martin Riches was born in 1942 on the Isle of Wight, an island in the English Channel close to the English mainland. His father worked there as the assistant company secretary of the Saunders-Roe Company that built the Supermarine Walrus, an amphibious seaplane, designed in 1929 by R.J. Mitchell and used principally for air-sea rescue. 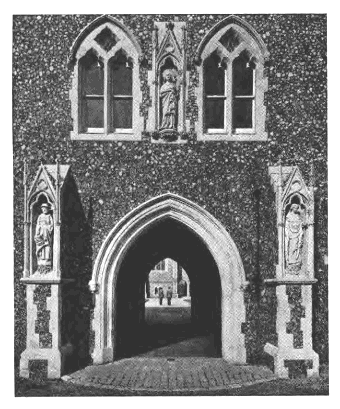 In 1945 the family moved to Brighton on the English South Coast. He was educated at boarding schools in Brighton and at St.Johns College Hurstpierpoint. The College has the oldest Shakespearean Society in existence (yearly productions since 1854) and the oldest British school magazine (published since 1858).
He designed stage sets for the former and wrote a short adventure story for the latter.

In 1951 his family moved to India so he spent his school holidays at his Brighton prep school, Hollingbury Court, where he came under the benign influence of the headmaster E. D. G. Robertson.

As a child he already had the ambition to become an artist but this was rightly considered by those responsible for paying the fees and grants to be an insecure profession and so he studied at the Architectural Association School of Architecture, London. In any case this was a splendid training in both art and technology.

He worked as an architect for DW5 (Directorate of Works for the Navy), for Smiths Industries (clock and instrument makers) and for Richard Sheppard Robson & Partners (university buildings.) He had a large flat in "Swinging London" and was visited by many artists from West Berlin.

In 1969, and without a word of German, he visited West Berlin, as he thought “just for a week”. During this week he was offered work at the office of architect Hasso Windeck who was using an English construction system. CLASP (Consortium of Local Authorities Special Program) that Martin had previously used while designing a clinic for the Navy. He later worked for Büro von Beulwitz u. Bonn on the Technische Fachhochschule Berlin-Wedding. Some of his drawings for this project are now in the collection of the Berlinische Galerie.

Despite working as an architect, most of his friends were artists and musicians in the thriving West Berlin art scene. He was introduced to the flautist Eberhard Blum and with him in 1974 he had his first exhibition, with 5 concerts, Objekte Texte Kompositionen, at the Haus am Kleistpark. This set the pattern for his subsequent work in collaboration with composers and musicians. Since 1978 he has worked exclusively as an artist. 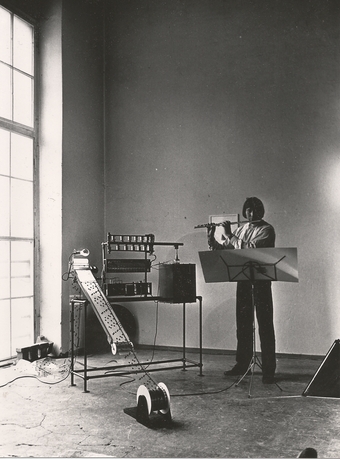 Eberhard Blum rehearsing All Change with the machine

His breakthrough came in 1979 with the Flute Playing Machine built for another exhibition organised by Eberhard Blum and dedicated to the inventor of the modern flute, Theobald Boehm. Many works have been written for it including the duet All Change for Flute and Flute Playing Machine by Schaun Tozer who had read about it in an article by Jasia Reichardt in a London art magazine. It has been performed in innumerable concerts throughout Europe and in Japan.

Other music machines and installations followed which can be seen by clicking on index below. They include the Talking Machine, the Singing Machine, the Thinking Machine and many others. They have been shown throughout Germany and in 20 other European countries, many times in Japan and at the New York Hall of Science

Some of his works are in public collections but he lives by showing his work in exhibitions and concerts and, occasionally, by prizes, by lecturing and as a guest professor. He is skilled in mechanical design and construction; in the machining of wood, metal and plastics; in programming, including assembler languages, and he also has a practical knowledge of electronics. A recent double exhibition in Berlin at Acud and Meinblau.

Martin Riches is married to the Japanese journalist Yumiko Urae.